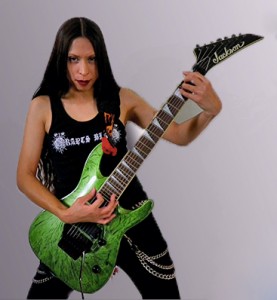 I call myself Mage.  The internet screen name I used as a child was madmetalmage, so I stuck with that as the URL for my website and shortened my stage name to Mage.

I am originally from Vancouver Island, BC, Canada and graduated from Vancouver Island University in 2010 with a Bachelor of Music in Jazz Studies.  At VIU I majored in guitar and minored in vocals.  My studies involved various aspects of music such as performance, composition, theory, studio recording, history, teaching, and career development.  Prior to my university studies I was heavily involved in music with participation that ranged from jazz festivals with my schools to both regional and national songwriting competitions as well as examinations and recitals for the Royal Conservatory of Music in Canada.  In 2003 I received second place in the Canada Music Week Writing Competition for my song “Flower of Lies.”

In 2009 after having completed my studies I moved to Vancouver, Canada where I was involved in a few musical projects.  In 2010 I wrote and recorded some music with Zeal.  In 2013 I produced, wrote parts, and provided bass, keyboards, and backing vocals to the song “Enter the Flames” by Flames Ov Gehenna.  I continued writing music and have made it available for streaming at my Soundcloud, MySpace, and YouTube.

In 2014 I relocated to Los Angeles, CA where I continue to pursue composition.  In May 2017 I completed my studies at California Institute of the Arts (CalArts) as an MFA Performer-Composer.

My instruments are guitar, piano, bass, and vocals.  I enjoy writing a variety of music including but not limited to jazz, contemporary, and heavy metal.

Listed below are some examples of my works:

One thought on “Portfolio”

This site uses Akismet to reduce spam. Learn how your comment data is processed.